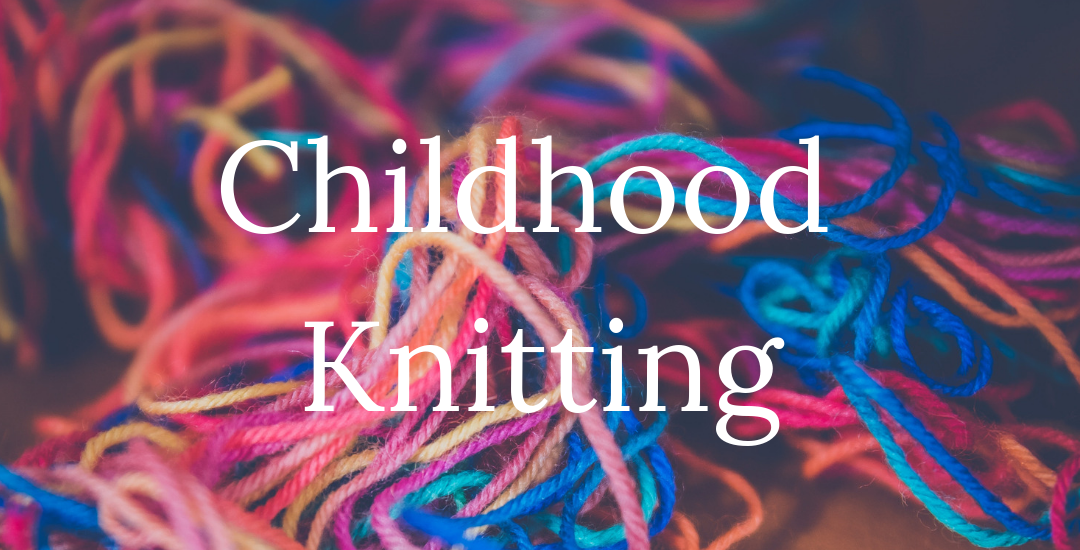 We all have our beginnings with yarn. Everyone has a story, a memory of the first time they held yarn in their hands, the first stitches, the first person who showed them something wonderful. I want to share some of my memories with you. I’d love to hear your memories as well. Leave comments below or email me at eliza@squigglidinks.com.

My mom is a multi-crafty person. (She used to say artsy-fartsy when I was a kid.) She taught me to sew and to knit, and she let me try almost every crafty thing she was doing. (Except using the hot glue gun.)

And I enjoyed them all. But knitting was like magic.

I had a Cabbage Patch doll (I was born in the mid-80s), and one day my mom knit this doll a salmon-pink cardigan from a baby sweater pattern. She wasn’t done by the time I went to bed, so I climbed the stairs, dragging my feet and looking down at her, knitting on the couch. The next morning the doll was sitting where my mom had been, wearing her new sweater.

One day no sweater, the next day you wake up and—poof!—sweater.

I know now that for my mom it wasn’t like that. But that’s the way a child’s mind works sometimes.

When I asked to learn to knit (I was about five), Mom taught me the long-tail cast on, knit stitch, purl stitch, and how to bind off. I got all of it—except the cast on. I just couldn’t do it. I ended up figuring out for myself how to do the backwards loop cast on (I didn’t know what it was called at the time), and I used that instead. But I didn’t like that it left gaps between the stitches along the edge, so when I wanted a really nice clean edge, I would take one needle and my ball of yarn and hand them to my mom, saying, “Can you please cast on this many stitches?” And she would graciously stop and cast on the stitches that I needed. (I did eventually get the hang of the long-tail cast on, and it became the only cast on I used for the next 20 years—I didn’t know there were others until the advent of Pinterest and more/better knitting books.)

In first grade, we had a unit on knitting, or maybe it was hand-crafts. Either way, our music teacher’s mother came to our class to teach us to knit. Mom volunteered to help because, let’s face it, teaching 20ish six- to eight-year-olds (it was a mixed group of first and second graders) how to knit is a big task. By then I’d been knitting for a year or two, and could knit and purl and backwards loop. I’d like to say I helped my classmates learn, and I probably did help a few. But I also probably showed off more than I’d like to admit.

Most of the class was just as glad to be done with knitting when the unit was over. A couple kept trying for another week. I tried reteaching one girl, after—to my seven-year-old horror—she twisted her needles in yarn, claiming, “I’m knitting!”

Only one of my friends kept at it, loving it (and all crafts) as much as I did. For months afterward we took our knitting to school and to each other’s houses when we went over to play. I don’t remember if she ever learned how to purl. But she got really good at garter stitch scarves.

My next memorable knitting project lasted me years. I was given two skeins of really soft, chunky acrylic yarn in vibrant purple and brighter-than-raspberry pink when I was in third or fourth grade. My chosen project: a blanket for my American Girl doll (later, dolls). It was stockinette stitch, in two-row stripes. Somewhere along, I accidentally knit three stitches on a pink purl row. I realized it inches farther along and was not about to rip it all back out.

But though the blanket wasn’t large, it took me years to finish. My attention span for any project was. not. long. I had always been easily distracted by metaphorical squirrels and shiny objects. (Just ask my mom.) I had a drawer in my closet for unfinished objects which was always packed full to the point of not closing properly, and the blanket ended up in there more times than I can count. I would work on it for a while, put it away when I got bored or distracted, then rediscover it and work on it again for awhile until the next interesting idea came along.

I eventually did finish it, and my dolls got a lot of use out of it. When I outgrew my dolls, I left them on display on a shelf in my room. I didn’t pack everything away until I went to college. When I did pack it all up, I’m pretty sure I saved out that blanket so I could keep it—it had taken years to make, after all. I must have, because I have no idea where it is now, while I know exactly where the rest of the doll stuff ended up.

What projects did you make first? Who taught you to knit? Have you ever put away an unfinished object for years only to find it again later? Tell me about it in the comments!

Click here for a free copy of my most versatile hat pattern–it works with any needles, any yarn, and any size!