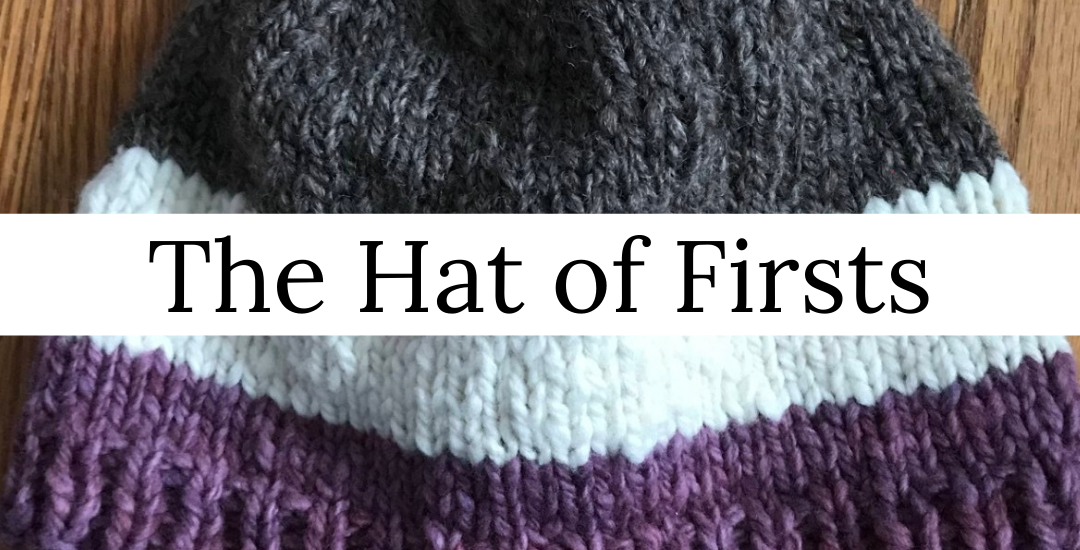 This is probably the most basic hat I’ve ever made. And that’s ok (basic isn’t bad)–the yarn is what’s important in this case. This yarn tells a story. Several stories, in fact.

You see, I spun this yarn myself.

I was interning at my local library during college when a local group put on a mini renaissance fair on the library lawn. I could see people in costumes from the library window. I don’t remember what most of them were doing; the one who caught my eye was sitting at a spinning wheel. As soon as I was able to take my lunch break, I hurried out to talk to her, since the Saturday morning event was wrapping up. She let me watch for a few minutes, and she showed me how she used her drop spindle, explaining that it was the easiest way for a beginner to start. A couple other people came by to watch and chat as well, and to my surprise, I knew them: a mother and daughter who had gone to my church when I was a kid, who now had a farm…with sheep. We talked through the rest of my lunch break, and my head was full of fluffy wool for the rest of the day. A week or two later, a gift arrived from the old church friends: a ball of white roving from their Romney sheep to learn to spin with. I made my own spindle (with my dad’s help) from a dowel, a couple of wooden discs, a small hook, and a bit of paint. And I began to spin. The white on my hat is that white Romney wool, the first wool I ever spun with a drop spindle.

The purple on the hat is actually from that same wool, but I tried another first: dyeing. I used two packets of grape Kool-Aid and one packet of cherry, and I love the way the purple ended up slightly rosy, with pinker sections. (It smelled really yummy at first, too!)

I’ve spun other wool with that spindle since then, and knit some things with it (I made my friend a scarf with some alpaca, but that’s a different story). And then for Christmas, my husband bought me a spinning wheel.

I’ve wanted one for years. Years and years. It was too expensive at first, and then I took a break from spinning when my boys were born. But I never stopped wanting a wheel. When I decided the boys were old enough for me to get my wool back out of the closet, my husband started looking for a wheel that met my requirements, and he found it: a double-drive Ashford Traveller. He bought it used from someone in New Zealand. I’m blown away by this: someone in New Zealand has spun on my spinning wheel. I love this connectedness across time and space. The wheel also came with a small starter bag of wool (also Romney, I think, and from a New Zealand sheep!). My first attempt to spin with it was slow and full of pausing to look up YouTube videos, but I ended up with a bobbin full of two-ply, usable yarn, and I couldn’t have been prouder. That’s the brownish gray at the top of the hat—my first wool spun on my new wheel.

That’s why this yarn needed a simple hat where the yarn could be the star of the show—it’s all my firsts, and, quite frankly, it’s pretty uneven. And I wanted something that I would use—a lot.

Here’s what I did, in case you have some special yarn about the same bulky weight that you want to feature in a simple hat:

I followed the basic pattern for the Jewel Stripes Hat, using size 10 needles. But with this wool I had a gauge of 13.5 stitches per 4 inches, rather than the 15 stitches per 4 inches called for in the pattern, so I only cast on 70 stitches. I knit 5 rounds of ribbing, and then another 23 rounds before following the decrease instructions. I only had small balls of the different colors, so I just color-blocked it. If you want to stripe or add a pattern, go for it, or you can do a solid color. Whatever works for your yarn.

My new hat fits me perfectly (I have a 22 inch head), and I’ve gotten to wear it a couple of times on days when spring hasn’t quite seemed to kick winter out of the area.

Do you have special yarn, spun by you or by someone you know? Have you made it or found it in some other way? I’d love to hear about it in the comments!

Join my mailing list to receive updates on new posts and patterns, plus other goodies just for my followers!

One Reply to “The Hat of Firsts”