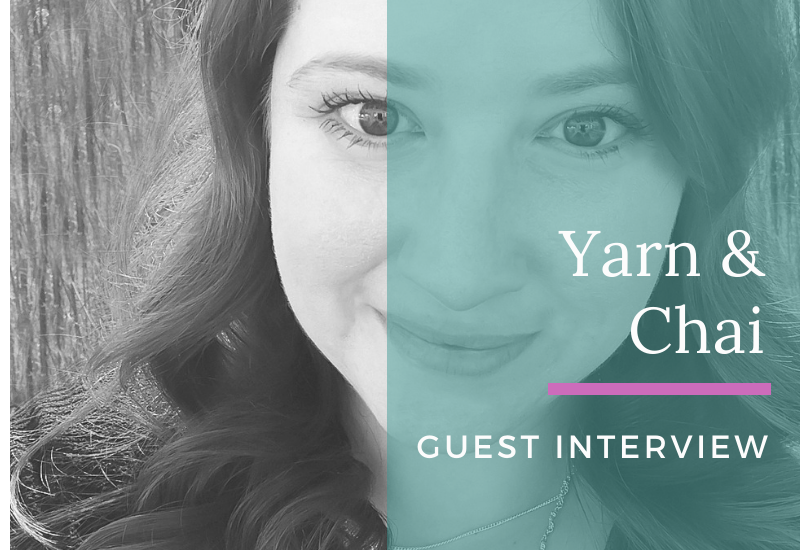 I fell in love with Rebecca from Yarn & Chai‘s designs back when her business was still called Little Monkeys Crochet. Her designs are chic and gorgeous–this is not your grandma’s crochet. I also resonated with her because she’s another mama who’s rocking the maker business. I’m so excited that she was able to be part of my designer interview series!

1. When/how did you learn to crochet?

After college I was doing freelance web design work, and around the time that my second son was born in 2012, I was creating a site for a friend’s crochet business. By the time I was finished I was so impressed with all of the beautiful and adorable things she was making, and since I had no real hobbies, I decided to teach myself to crochet. The first thing I made was a hat, using a YouTube video as a guide. I had no concept of yarn weights or gauge checks at the time and my hat came out about twice as big as it was supposed to, but I was hooked!

2. How did you get into designing?

Right from the beginning, I was intrigued with how patterns were created, and how stitches worked together to achieve different shapes and effects. I love math, so my brain is wired for that stuff. I followed other people’s patterns for a short time as I learned the basics, but I was branching out on my own pretty early on. It was my husband who eventually convinced me to share my ideas on a blog. I really didn’t think much would come of it.

3. What about the craft do you find most rewarding?

I deal with General Anxiety Disorder; crocheting calms me and helps me unwind, which is incredibly important to a mom of three young, energetic, loud boys. Even though crocheting is now a full-time job for me, I still find that it’s the thing I want to do at the end of a long day.

4. Are there any aspects of yarn-crafting that you avoid?

Not really; I’ll try anything, if it helps me to achieve the idea I have in my head of what I want something to look like. I do generally avoid designing things that change color a ton, because, you know… those ends!

5. Is there one crafting/designing tip someone has given you that has stuck with you?

It’s not crafting-specific, but the best advice I’ve applied to my business is to stop worrying about what others are doing and being successful with; I need do what works for me, even if it means doing things others are not doing. It’s this mindset that gave me the courage to start a crochet business built solely on modern designs (which, a few years ago, was something not many designers were doing). I was scared that I would have no audience, and I was relieved and quite overwhelmed by the number of people who really did desire chic, modern patterns!

I would love to do garment design. I’ve been fiddling around with it for quite a while, but I haven’t produced anything I’m confident enough to publish. I’ll keep trying until I do, though!

7. What/who is your greatest source of inspiration?

I am constantly inspired by other modern designers, but as far as my own designs, I try to always be aware of the fashions that are around me. What are my teenage nieces wearing? What am I seeing on Instagram, or in the mall stores? If I can make a crocheted version and still keep it modern-looking, I’m up for the challenge.

8. If you could have a yarn superpower, what would it be? (Sewing in ends with the snap of your fingers, all your math always works out perfectly…you name it!)

If I could write a pattern for one size and then wave a magic wand and have it accurately translated for every other size… oh my goodness, that would be a game changer!

Check out some of Rebecca’s sleek and modern designs:

Disclaimer: Some patterns from designers I feature will be free, others will be paid. I am not affiliated with them nor do I make any commission if you purchase a pattern. My goal is simply to help you find your best next pattern while supporting other designers in this maker community.

Sign up to my newsletter to receive updates and more, plus a FREE pattern for my most versatile knit hat–it works with any needles, any yarn, and any size.