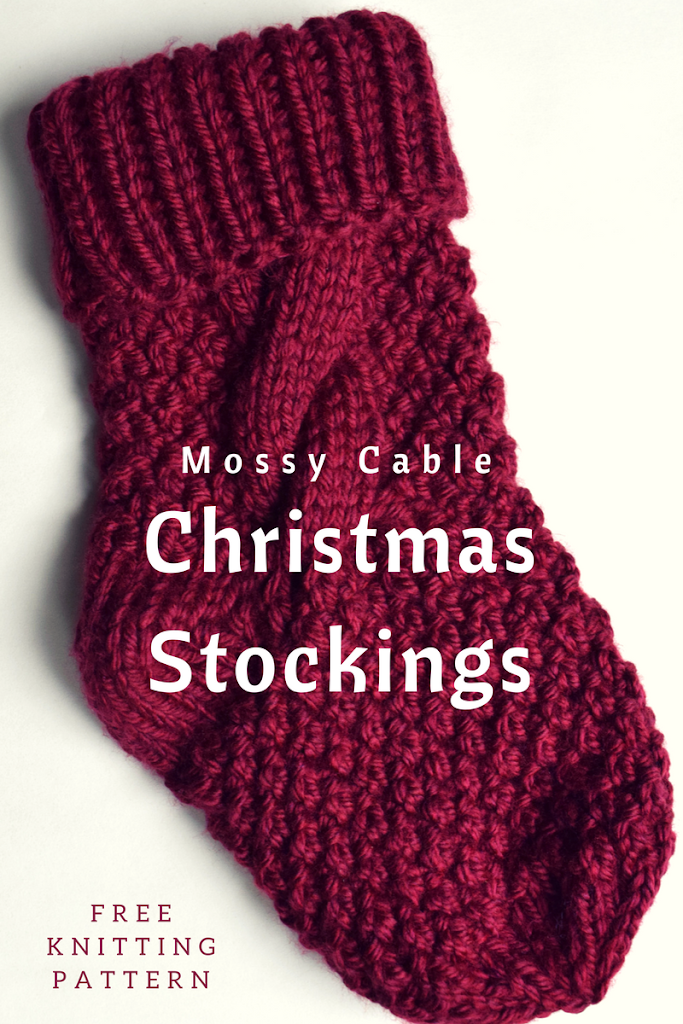 “The stockings were hung by the chimney with care…”

Okay, to be honest, we don’t really have a chimney. We’ve hung our stockings beside a door frame and across the top of our french doors, depending on which room we’ve put the Christmas tree in. But there’s something nice about having a set of matching stockings for the whole family lined up side by side, waiting to be filled on Christmas Eve, no matter where they’re hung.

Last year, my sister-in-law approached me about making a matching set for their family. They had gotten one stocking at a time as each of the kids was born, and now that they’re getting older, she wanted a set that they could keep as their own forever. She had seen these stockings from Land’s End on Pinterest, and she liked almost everything about them, but they were discontinued. So I had her choose her yarn colors and got to work. 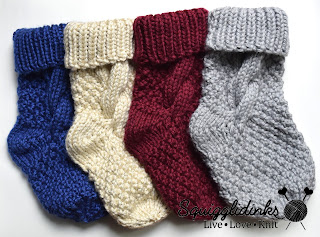 I had to frog the first one a couple of times before I got the gauge right, and the heel took three or four tries, but I like the final result. The stockings are knit ankle to toe, on circular needles, with a long cuff that folds over and a short-row heel with wrapped stitches (don’t worry–there’s a video for that). The whole stocking is done in moss stitch with one wide cable running down the ankle, and the toe is just simple k2togs. I didn’t line the stockings; I don’t think you need to, and I like letting them have some stretch for gifts. You could always line them if you prefer.

We used Lion Brand Hometown USA yarn, a bulky (weight category 6) yarn. It worked up really quickly on size 11 needles. I love the colors my sister-in-law chose, which we could only find in Hometown USA, and it’s really soft and squishy and fun to work with. But I have a few concerns about its longevity for Christmas stockings, and since I only made them this year, I won’t be able to give an experiential report on this for a while. I’m afraid that it’s too soft and not sturdy enough–that it’ll fuzz too much if it gets washed, or that gifts or decorations will get caught on it and pull strands. An alternative yarn you could try would be Lion Brand Wool Ease Thick and Quick, which was actually my first choice for the stockings, except that we couldn’t find the right color palette for what my sister-in-law was envisioning. 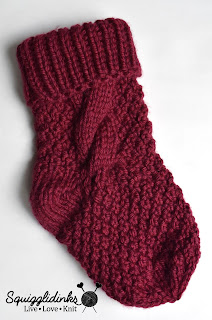 A couple of extra notes before we get to the pattern: I did not block the stockings before taking photos. I also did not attach strings for hanging. My sister-in-law was considering getting them professionally embroidered, so I gave them to her as-is with instructions where/how to attach strings. The cuffs in the photos look a lot tighter than they would if they were blocked, and they’ll stretch out a lot once there are presents inside. The cables will stretch out a bit too.

If you prefer an inexpensive printable PDF of the pattern, large print and ad-free, click here to visit my Ravelry page. 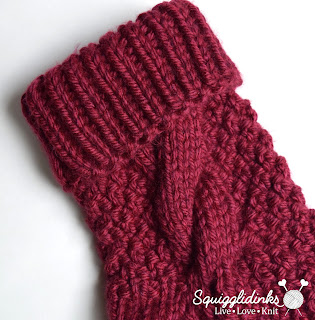 Cast on 40 sts. Join into a circle; place marker to mark beginning of round.

The cuff will fold over on itself so that the cast on edge will cover approximately rounds 1 & 2 of the leg section.
Rounds 1-20: k1, p1, repeat to end 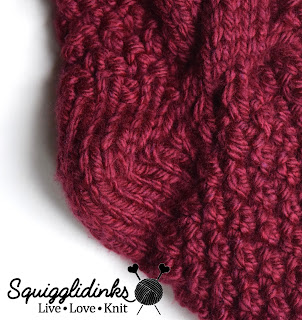 The heel is worked in short rows as though you were using straight needles, turning your work when directed.

If you find short-row heels intimidating, or if you simply prefer video instructions, feel free to follow along with the video here. I apologize for my less than stellar setup—I’m knitting sideways half the time and I leave the screen occasionally—but at least you get to walk through the whole heel in real time with me. (And yes, I knit four stockings, so I took photos of one and a video of another.) 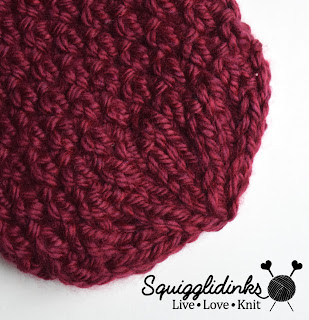 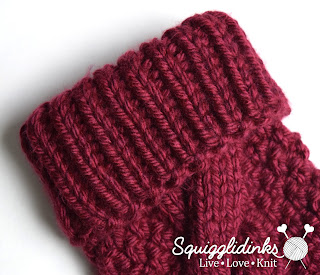 Fold cuff in half so that cast on edge is just covering the beginning of leg cable. Cut a ribbon or piece of yarn long enough to hang the stocking wherever you want it. Thread the tie through the fold in the cuff so that it’s looped through at least 3-4 stitches (remember the weight of whatever gifts are in the stocking will be held up by this point). Hang it by the mantle, the stair rail, the doorway, or wherever you like!