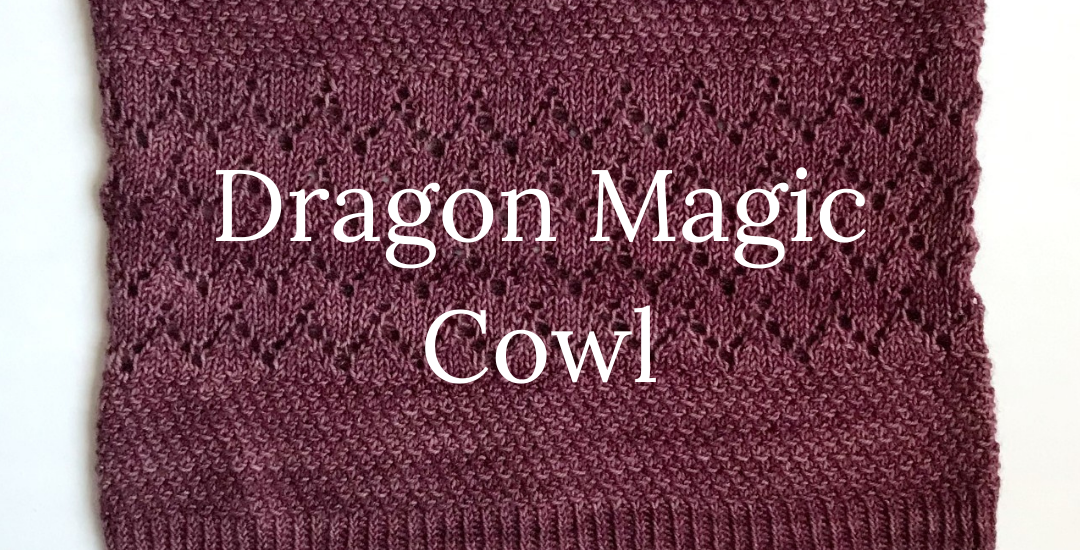 I don’t talk about it much here, but I’m a writer. (Yes, blog posts are writing, but that’s not what I mean.) I’ve been writing stories since I was a kid, scribbling complete books on yellow legal pads. None of those early stories were worth much besides practice, but I’ve kept writing. At the same time, I’ve grown in my knitting design skills. And one day it hit me, all at once, a design based on Sabryn, a story I wrote. I was originally hoping to publish them at the same time, but I couldn’t wait—I just love this design, so I’m releasing it first.

Here’s the back cover blurb of Sabryn:

To go straight to Ravelry and purchase the pattern, click here.

To go straight to Amazon and purchase Sabryn, click here. You can also find the paperback at your favorite bookseller or local library.

The cowl design is inspired by the dragons and their magic. Here’s a bit of the scene where Sabryn meets her first dragon:

They had gone less than a hundred yards into the barren plain when an enormous black shadow swooped overhead. Sabryn ducked and looked up as the winged beast wheeled and came back. She stood frozen in her tracks, huddling closer to Jeren as it opened its jaws wide. Without thinking, she threw her free arm over her head as though to block a blow. Even as she squeezed her eyes shut tight, she knew she was being ridiculous. Dragon fire wasn’t stopped that easily.

It was like being in one of the kitchen bread ovens, the air so hot it hurt to breathe. But it wasn’t scorching. Actually, Sabryn didn’t feel like she was burning at all. Instead, her arm was being showered with pins and needles. She squinted her eyes open the barest fraction. They were surrounded by what looked like the dome of a giant soap bubble, which deflected the burst of flame away around them. As quickly as it had started, the flame stopped. The bubble dissolved as though it had never been. Sabryn collapsed.

Jeren knelt beside her. She wanted to tell him that she was fine, she didn’t need help, but she was distracted by the Dog. He stood in front, like a real guard dog, barking. She’d never heard him bark before. There were no words in it; he was simply trying to get the dragon’s attention. The dragon swooped low again, but instead of trying to roast them, it lowered itself to the ground as a duck lowers itself to the surface of a pond. The wind from its violently beating wings buffeted them from dozens of yards away. Sabryn was glad that she was already sitting because she would have been knocked from her feet.

The dragon came to rest in a sort of crouch, settling its inky wings along its back with a shrug. It was the size of the stable building at home, armored with plate-like scales of burnished bronze. Its eyes glowed like hot coals in its huge, inscrutable face. “Forgive me, friend. I did not see you.” Its voice was deep and rumbling, like rock grating against rock.

“There is nothing to forgive,” the Dog said calmly.

Sabryn thought that was rather lenient, but she was in no position to judge.

The construction of the cowl is pretty straightforward, although there are decreases before the lace section and increases after it because of the difference in gauge between the stitch patterns. I used extra stitch markers to mark the repeats in the decrease and increase rows, which I recommend if you’re going to be distracted while you work on it. (I had two little distractions running around while I was knitting it, and I had to keep checking myself over and over.) The stitch markers meant I only needed to count a handful of stitches between markers to check if I got the decreases right, rather than having to repeatedly count the stitches in the full row.

The dragon scales sections require a very specific yo (yarn over)–the yarn must be brought back to front over the right needle, clockwise, before going under the needle to prepare for the next knit stitch. If the yarn is brought around the other way (under to the front and then back up and over the right needle), the stitch pattern will look different. In the lace section, the direction of the yo doesn’t matter.

My final note about the pattern is that it must be blocked. The lace section looks kind of “meh” as you knit it, but once it’s blocked it really opens up and looks awesome.

Get your copy of Sabryn here!